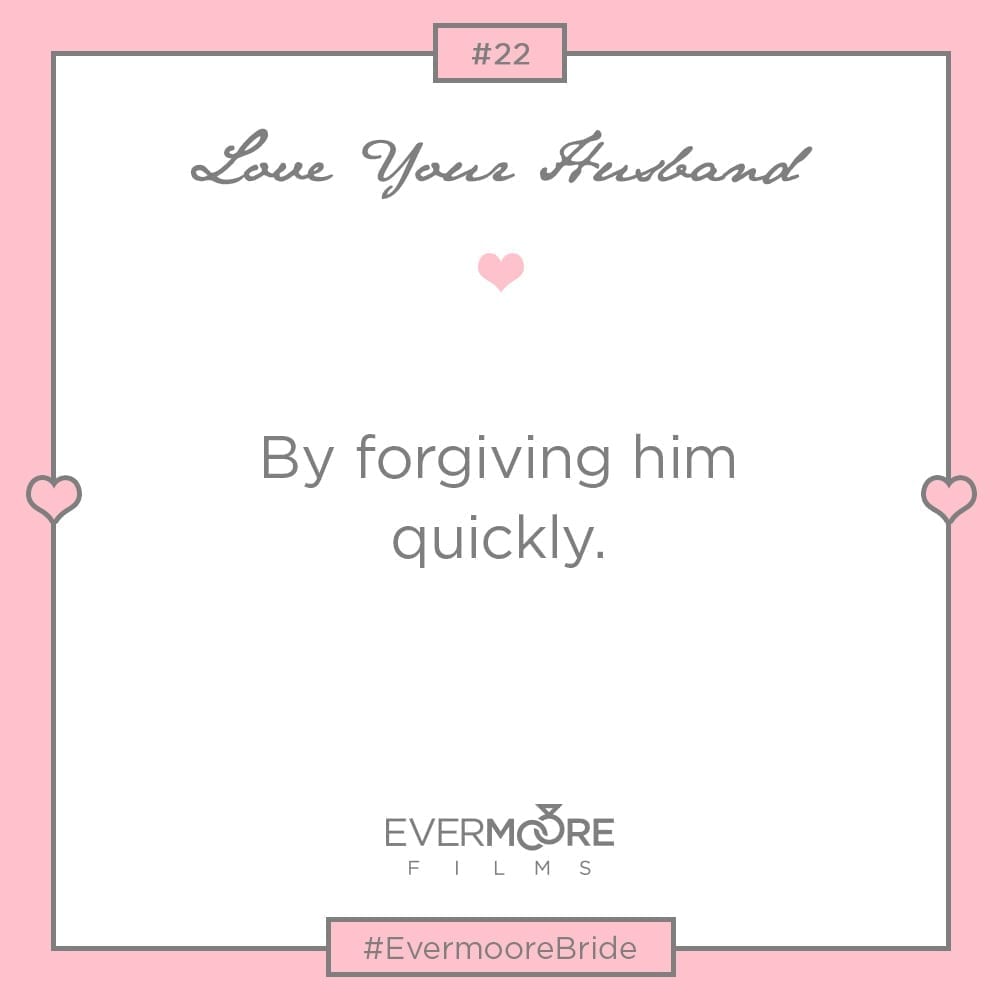 Forgiveness. We all need it. No one is perfect. To forgive is to love. To love is to forgive. Your husband WILL make you mad, frustrated, angry, exasperated, overwhelmed, and/or sad at LEAST once in your entire marriage (I know, hard to believe for you newlyweds 😉 ). So when he does, forgive him. Forgive him quickly. Don’t let it hang second after second, minute after minute, hour after hour, day after day. Skip the misery for you BOTH and just let it go. Forgive the offense.

That’s the easy part. Now here’s the hard part. Recently, I was struck by an incredible thought. When you forgive, forgive quickly and forget it COMPLETELY. Now, I’ve heard of forgiveness, I’ve heard of quickly, AND I’ve heard of completely. But as often as I’ve heard that, known that, and THOUGHT I was doing that, I was recently struck that there’s an important element to not forget in all this. It’s easiest understood through an illustration. Let me share.

One morning, there was a man who planted some flowers in his yard. The flowers were on the edge of his property, right next to his neighbor’s driveway. He walked away and was gardening another part of his yard when out came his neighbor. His neighbor hopped in his car, backed-up to leave and ran over this man’s newly planted flowers! The man goes to his neighbor and says, “Hey! Did you see what you just did? You ran over my flowers!” The neighbor replies, “Oh, wow! I’m so sorry! I didn’t mean to. Will you forgive me?” Forgiveness says “Forgive. Quickly.” The man says, “Okay, sure. But please be more careful next time.” The neighbor replies, “I will!” and drives off. That’s where it usually stops, but suppose later that morning the neighbor came back and ran over this man’s flowers AGAIN! Now if the man says, “Hey! Did you see what you just did to my flowers AGAIN! You ran over them like you already did this morning!” then what do you suppose is truly in his heart. He never actually forgave his neighbor because he held onto his bitterness and refused to forget what had been done to him in the past! Forgiveness says, “Forgive. Quickly.” But true forgiveness says, “Forgive. Quickly. Always. And then forget it and never ever ever remember it again EVEN if it happens again!” So what should the man say to his neighbor? “Okay, sure. But please be more careful next time” without bringing up the past. And what happens if the neighbor runs over his flowers again…and again…and again? What would forgiveness say to do? “Forgive. Quickly. Always. Forget.”

This tip is part of our Bride Tip series, which encourages newlywed brides to love their husbands more every day! Follow the series and join us for new tips each month!

Evermoore Films is a video production company based in Bakersfield, California, providing cinematic wedding films and corporate promo videos to Kern County and beyond.